The Rock, Words of my Heart by A Texas Artist Laurie Pace

Jack phoned yesterday when Terry and I were out walking. He had seen the blog and called to catch up.  I asked him where exactly he was going with the rock as he had ended up his sermon yesterday and Terry and I both somehow missed his last tie in. 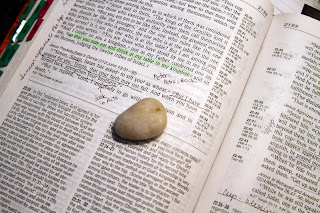 He said it was referring to Jesus knowing Peter would be the "Rock" the church was built upon.

Jesus knew that, as well as he knew Peter would betray him. That "look" was a look of love THROUGH the eyes of grace,  when he caught Peter's eye after the betrayal.

Jack wanted us to be reminded of the 'rock' that Peter was. Highly respected among the disciples, no one believed  he believed he would ever betray Jesus.


Jesus knew it would happen. 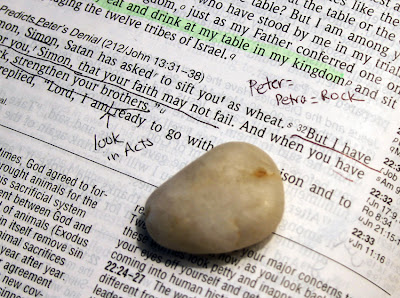 For me it completes a circle. Reading in Matthew at the end of this post,  when Peter was told by Jesus that he was the rock and foundation of the church, it continues through the last supper and through the painful betrayal and on through the beginnings of the church.

Most likely Peter was in pain torn as to what to do in the situation and somehow decided it was better to not be identified as a disciple.  He simply continued to deny a relationship with Jesus. Then the cock crowed and Peter looked up in surprise to see Jesus' eyes on him.   They were not eyes of anger but as Jack put it, they were "the eyes of grace, forgiving Peter as it happened, knowing it was part of God's plan for him to betray Jesus.

Jesus' words to Simon Peter, "Simon, Simon, Satan has asked to sift you as wheat. But I have prayed for you, Simon, that your faith may not fail. And when you have turned back, strengthen your brothers."  Luke 22:31-32

There is a wonderful article on Wikipedia... please read it.


Words of my heart, Laurie

Matthew 16:13-20   "When Jesus came to the region of Caesarea Philippi, he asked his disciples, “Who do people say the Son of Man is?” They replied, “Some say John the Baptist; others say Elijah; and still others, Jeremiah or one of the prophets.”  “But what about you?” he asked. “Who do you say I am?”

Simon Peter answered, “You are the Messiah, the Son of the living God.” Jesus replied, “Blessed are you, Simon son of Jonah, for this was not revealed to you by flesh and blood, but by my Father in heaven.  And I tell you that you are Peter, and on this rock I will build my church, and the gates of Hades will not overcome it.  I will give you the keys of the kingdom of heaven; whatever you bind on earth will be bound in heaven, and whatever you loose on earth will be loosed in heaven.”  Then he ordered his disciples not to tell anyone that he was the Messiah."
Posted by Laurie Justus Pace at 7:30 AM

Labels: A Texas Artist Laurie Pace, Grace of God, prosperity from God, rock of grace, Simplicity in life, Turning it Over to God, unanswered prayers, Words of the Heart